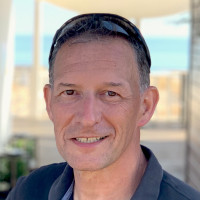 SEE THE A.C.T. AND STEVE'S REVIEWS ON TRUSTPILOT - CLICK HERE

Steve Payne is a certified Master Trainer of NLP, recognised by the ANLP and is the founder and lead NLP trainer for the Academy of Coaching and Training.

Steve sits on the Training and Accreditation Panel for the Association for NLP (ANLP). He was certified as an NLP Trainer by NLP co-creator John Grinder and also studied the other NLP co-creator, Richard Bandler. In addition, Steve studied NLP with Key NLP developers, Robert Dilts and Judith DeLozier at the NLP University in Santa Cruz, California.

He is co-author of 'My 31 Practices', published by LID Publishing. The book explores values through an NLP lens..

Steve's passion is personal development and communication. He specialises in Public Speaking training and is one of the few organisations in the UK that teaches ethical rhetoric - the art and science of written and spoken influence and persuasion.

BACKGROUND: Steven trained as an actor at the Royal Central School of Speech and Drama, London. He spent 10 years as a professional actor with extensive experience in theatre, radio and television. In 2009 Steven was an Associate Producer on the Oscar shortlisted short film, Gone Fishing. He also co-wrote the short film, Morrison's Birthday Party, which won the New York International Film Festival. Steve also lectured in drama at Morley College, London.

Steve also has extensive experience in the corporate world. He was the Operations Manager for an international trade fair organisation in the UK before being head-hunted and moving to Johannesburg, South Africa, spending 5 years as Director of Sales and Business Development for a UK subsidiary. This role included all recruitment and training of new staff. Steve also worked in trade promotion for UK and South African companies in Peru, Argentina and Brazil (he is a Brazilian Portuguese speaker) as well as Eastern Europe setting up business networking in the Czech Republic, Slovakia, Poland, Hungary and Russia.

Steven also works an executive coach and is passionate about making sure standards in coach training are maintained. He has been training professional coaches for more than 10 years and created the A.C.T. Premier Coach and NLP Certification Program, which offers an Association for Coaching Accredited Certificate in Coach Training and an accredited NLP Practitioner certification.

As for hobbies, Steve loves flying. He is a qualified pilot (PPL(A)). He also loves cinema and creative and factual writing.

I am yet to post any case studies. Please check back later.

I am yet to post any courses/workshops. Please check back later.

The training at the Academy of Coaching and Training is exceptional and Steve uses NLP teach with authenticity and integrity meeting his students at their level of growth. It makes very little difference if you choose Live-Online or in person training and the online sessions have expanded my network around the globe. Steve and his team make sure that everyone works together to achieve the best results possible for your personal or business needs and despite local competition I have returned for more training with this values driven company. I highly recommend.

A review by Eva maria Dattadeen

Doing the NLP Master Practitioner with Steve at NLP Dynamics was one of the best things I ever did. I started off with an element of curiosity in NLP and a Groupon voucher - It became a journey of self-discovery, personal achievement and skills development, thanks to Steve. His enthusiasm is infectious and his amazing teaching skills and knowledge make it much fun to learn. Steve creates an environment where students can feel free, safe and curious. He engages equally amazing resource teams and guest teachers to enrich the experience. And, Steve remains professional and caring at all times. I highly recommend Steve's courses without any hesitation.

A review by Catherine Durin

Steve’s knowledge is equaled by his passion for the subject. I have now followed two courses run by NLP Dynamics (Coaching with NLP and NLP Practitioner Course) and they have been great experiences. Steve creates a relaxed atmosphere among the participants, which offers ideal conditions to learn, explore and experience the magic of NLP. I have really enjoyed the interactions in the groups; some of the processes we learn really do transform lives, even on the course! Those life changing moments were a privilege to be a part of. Steve is very mindful of each person’s needs within the group. I have learned a huge amount about myself and others and I am now looking forward to doing the Masters Practitioner Course in the autumn. I don’t hesitate one moment to recommend Steve and his team. Go for it!

A review by Ian White 1

Steve (and Maggie) is a star. I have pursued my NLP diploma, practitioner and now master practitioner course through NLP dynamics and Steve has been instrumental in that journey.
His knowledge, passion, enthusiasm, honesty and humour all come together to create what I only can describe as a Super Coach. Steve has profoundly changed my life and for that I will be forever grateful. There are plenty of great NLP coach's out there, Steve is definitely one of them. If you are reading this and thinking NLP might be for you.. It is. Steve and the team are remarkable. Book with them now, you won't be sorry.

A review by Gareth Gore

I have just completed my NLP Practitioner Course with Steve Payne , Maggie Albrecht and the NLP Dynamics Team. To say this course is value for money is an understatement!
Both Steve & Maggie are consumate professionals and managed to make the content easy to digest and fun. It also helped having a great group who all fed of each other, an atmosphere down to how the course is set up. I have taken away a huge amount of learning and I am already enjoying putting it to good use . I would highly recommend this course to all.

A review by Ainara Leunda

A review by Kati Herranen

I found Steve a fantastically engaging and skilful trainer. It was this as well as his integrity, sincerity, openness and commitment to the development of NLP itself, and in particular to every single individual in his sessions, that made my NLP training a very special experience.

In fact, before I even started my Diploma Course - which I did to "reconnect" with NLP - with Steve and NLP Dynamics, I had already planned to do my Practitioner level training somewhere else. Yet I was so impressed with Steve's training that I very quickly changed my mind. Having now finished the Practitioner course with him, I can genuinely say I am very glad I did! And I already know I will be doing my Master Practitioner with him as well.

Steve makes excellence seem truly effortless. That is my goal, too, and with his training I believe it is possible.

A review by Donna Carty

Having attended both the NLP Practitioners and Master Practitioner courses with Steve and NLP Dynamics I feel very fortunate; Steve is an excellent trainer - professional, humorous, clear and able to deal with any question or situation thrown at him, and NLP Dynamics are a great organisation to deal with and be part of.
I had heard stories about other NLP companies and/or their trainers, which meant I was a little apprehensive going to my first course. Steve was welcoming from the start and seems able to put people at ease, certainly me. Through the Practitioner and Master Practitioner courses, the monthly Practice Groups and the various reasons I have had contact with Steve outside of those forums, I have always felt comfortable to ask any questions or raise areas that are issues for me and continue to learn so much about myself and, of course, NLP.

A review by Kevin George

Steve is a fantastic NLP trainer! I have sat many of Steve's courses and feel that he has a wealth of knowledge and exudes passion, this is demonstrated in all his sessions.I found his training style flexible, humorous, engaging and effective.

A review by Sue Perkins

I attended the January/February modular NLP Pratictioners' course in London and cannot speak highly enough about the quality of training we received. I attended the course with no real prior knowledge of NLP and found Steve's approach took me easily from a position of ignorance to a position of knowledge and confidence in my ability to use NLP. Steve planned the delivery of the course carefully so that we were always revisiting and building on what we were learning. He empathised well with all students and welcomed questions at any time to clarify understanding. Two things that really stood out were his brilliant use of metaphor to get messages across to the students and the demonstration of processes - it was obvious that Steve was very competent himself in the practice of NLP. I am looking forward to doing the masters course with him.

I have not yet reviewed any books.

This is the personal page of Steve Payne who is accredited by ANLP.