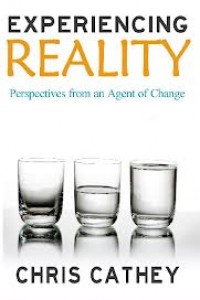 Everyone that enters the field of personal development or psychology does so for their own reasons. Many of us as we begin our training do so with all sorts of preconceived notions and unrealistic expectations. Often times it isn't until we have been in practice for a while or until we have seen enough clients that we realize that actually working with people and helping them to improve their lives can be quite different than we imagined.

Experiencing Reality: Perspectives from an Agent of Change is one person's attempt at summing up many things in one place that they wish they had known when they first realized that not only did they enjoy helping people but that they were going to embark on the journey of making it their life's work. This book contains a series of essays each metaphors that highlight various themes that the author has come across over a decade of studying human behavior and creating lasting change.

The Rapport Review
by Cameron Bradley

Agent of Change Hits the Mark (most of the time).

Cathey’s introduction to Experiencing Reality states that the purpose of his book is not to provide a technical manual but rather a series of stories for the reader to freely interpret for themselves. All stories begin with a quote, and most end with a paragraph (or sentence) how the experience relates to Cathey’s varying approaches to work as an agent of change.

I found most of the stories provoking thought in a pleasantly straightforward way and but a few falling short due to insufficient content which, in these moments, pressed the narrative into producing a somewhat moralising tone. These stories came across in need of further polishing to not be described as simply stating bog-standard common sense. But on the whole, Cathey’s earnest and uncomplicated writing embodies his competence as an agent of change for young people and the reader will get the most out of these stories if they are interested in working in similar areas. It is through the more spontaneous situations in his stories that Cathey actually goes into some basic level of practical technique (despite his earlier saying otherwise) and this is where he is obviously at his best—and the book at its most applicable. "Working Within People’s Capabilities" was a stand-out story for me in this regard as was "Stacking Firewood".

This book could be considered as a useful primer for people starting out in the field of change work and a handy reference tome for the years to follow.

Entertaining and Easy to read

A series of short stories or tales taken from the author's own experiences as a child , youth and beyond into adulthood. The book is an easy pleasant read , a little short if I'm honest but then again maybe its just about right for an insight into coaching and change.

I like the way the authors uses his stories and metaphors I think everyone will be able to relate to many of them. For people in the business of change I think the book will be a good reference book that one could take snippets from and use in there own circumstances. For me I think it will be a useful resource to be *the kind of person* who is generally helpful/caring person rather than a guide on what to do to be helpful person.

I think I will pick this book up from time to time just for a short read and can see me applying the my own take on what the stories are saying.

All in all, I found that I agreed with much of what the author says as I read this book , Experiencing Reality