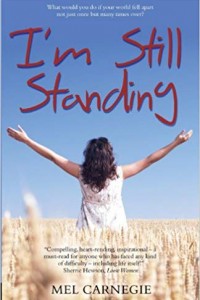 In I'm Still Standing, Mel Carnegie vividly recounts how she has fought adversity since childhood, beginning with the death of her father when she was just four years old and culminating with the discovery that her ten-year marriage had been nothing but a sham. She now believes that the man she called her soulmate was a sociopath. Sociopaths, or psychopaths as they are also known, live and breathe among us. They have no conscious. No empathy. No remorse. And there is no easy way to tell them apart from other people. Sociopaths are expert manipulators, and they are real - not just the fantasy of some Hollywood filmmaker. They look normal and they sound normal. Typically they come across as being charming, charismatic and the life and soul of the party. But underneath the mask they are nothing but predators, searching for people and situations that will give them their next 'hit' whatever that might be - money, status, sex, a facade of credibility...They see other people as nothing more than providers, who usually don't notice what they're doing until it's too late. Leaving trails of chaos, confusion and destruction behind them, they'll simply move straight on to their next willing target without even a backwards glance. When Mel discovered the truth about the man she called her soulmate, she pulled on all her life experiences to make sense of an unimaginable mess and fight her way back to life and to ultimate victory. Here she shares her journey with candid and often brutal honesty in the hope that she can help others recognise and escape the clutches of emotional abuse. This is her heart-rending and ultimately inspirational story.