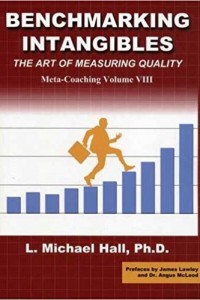 These benchmarking questions are about measurement and about scaling things that are not immediately tangible.  While there are many books on benchmarking tangible things, this is the first book on measuring intangible qualities.  Benchmarking Intangibles will introduce you to the processes of benchmarking intangible experiences, how to measure the most important things —the things that count most which are the most difficult to count.  It can be done and you can learn how to do it.

Learn “how to use the process of benchmarking to stalk excellence —from individuals to large organizations.  [Michael Hall has produced] a detail operational manual about those oh so important distinctions that seem oh so hard to measure.”
James Lawley, NLP Trainer, developer, and author of Clean Language

“In this book, Dr. Hall breaks new ground with confidence as well he might.  His exposure and illustration of process is elegance itself, it reads like a journey from darkness into light.”
Dr. Angus McLeod.

One thing to improve

Dr Michael Hall has again lead the way in thinking about, testing, refining and communicating an important topic for people coaching and leading change.

Here are just some of the many great ideas and tools that Michael offers: He reminds us that even intangible experiences (values, beliefs, skills etc) are embodied in our mind-body-emotion system and therefore can be identified in terms of specific place, time and kinesthetics. He presents the principles of measuring performance and then, with amazing specificity, drills down to the detail. He also deals with the complexity of there being optimum levels of performance or mastery beyond which a behavior ceases to be mastery and can even be damaging. He even offers specific questions to help us recognize the optimal range of a behavior we are benchmarking.

After describing the benchmarking of behaviors (performance) Michael turns to the measuring of experts’ knowledge and thinking (meaning) at all levels of the mind. Here he is following his Meta-States Model, which explains the creation of abstract knowledge out of empirical, see-hear-feel knowledge. Actualizing of any skill or expertise is based on two factors: meaning and performance. The skill and state of meta-detailing is central to benchmarking and Michael links the skill of meta-detailing to the precisions questions of the Meta-Model.

Speaking of benchmarking: in the book publishing industry there are benchmarks relating to page layout, editing, proof-reading, illustrating, quoting, referencing, indexing and more. As excellent as it is, Benchmarking Intangibles could be even more useful if Neuro-Semantics Publications were to make improvements in these areas. For example, the publishers could use a more consistent format to reference ideas and quotes so that the reader can access the original texts. The figures that have two axes would be easier to grasp if the axes were always labeled and the layout of tables could be improved. A more conventional index would allow readers to find topics such as ‘Meta-Model’ and ‘NLP’ more easily.