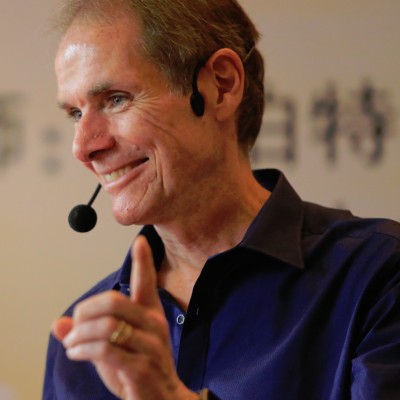 Robert Dilts has a global reputation as a leading developer, author, coach, trainer and consultant in the field of Neuro-Linguistic Programming.

Robert Dilts has a global reputation as a leading developer, author, trainer and consultant in the field of NLP since its creation in 1975 by John Grinder and Richard Bandler. A long time student and colleague of both Grinder and Bandler, Robert also studied personally with Milton H. Erickson, M.D., and Gregory Bateson. In addition to spearheading the applications of NLP to education, creativity, health, and leadership, his personal contributions to the field of NLP include much of the seminal work on the NLP techniques of Strategies and Belief Systems, and the development of what has become known as “Third Generation NLP.” Some of his techniques and models include: Reimprinting, Integration of Conflicting Beliefs, Sleight of Mouth Patterns, The Spelling Strategy, The Allergy Technique, Neuro-Logical Levels, The Belief Change Cycle, Generative NLP Patterns, the Unified Field Theory for NLP and many others.

Dilts is the author of more than 20 books on the applications of NLP to a variety of topics:

Robert’s recent book series on Success Factor Modeling identifies key characteristics and capabilities shared by successful entrepreneurs, teams and ventures. Next Generation Entrepreneurs (2015) presents models, tools, exercises, illustrations and case examples – of both world famous and everyday entrepreneurs – in order to help readers understand how to build a “Circle of Success” and create a business aligned with their life purpose. Generative Collaboration (2016) helps people to increase their capacity for working effectively together with others and to experience the excitement, satisfaction and power of collective intelligence. Conscious Leadership and Resilience (2017) defines the principles and practices to support readers to become more authentic, emotionally intelligent, purposeful and responsible, and create teams and ventures that are more productive, ecological, sustainable and fun.

Recognized internationally as one of the foremost developers, trainers and practitioners of NLP, Robert Dilts has done consulting and training throughout the world to a wide variety of professional groups and organizations.

Dilts is a co-developer (with his brother John Dilts) of the Success Factor Modeling(TM) process, a method to identify and transfer the critical success factors necessary to promote effective entrepreneurial activities within both new and traditional companies, by analyzing crucial patterns of business practices and behavioral skills used by successful individuals, teams and companies. They founded Dilts Strategy Group in order to apply the Success Factor ModelingTM process to support companies’ growth and development on many levels.

Robert is also co-founder, with Dr. Stephen Gilligan, of the International Association for Generative Change (IAGC). The purpose of the IAGC is to bring principles of generative change to multiple professions throughout the world. The IAGC offers training, certification and other resources that promote generative change in personal, professional and organizational contexts.

In 1982 Robert co-founded the Dynamic Learning Center with the late Todd Epstein. In 1991 he and Epstein (together with Judith DeLozier and Teresa Epstein) established NLP University, which provides a full range of basic and advanced NLP training.

From 1979-1981 Robert was Vice President and Director of Research for NOT Ltd. Division of Training and Research in NLP where he helped design the curriculum and testing procedures for the first NLP Practitioner and Master Practitioner certification programs with Leslie Cameron-Bandler-Lebeau, David Gordon and Maribeth Meyers-Anderson.

Robert has a degree in Behavioral Technology from the University of California at Santa Cruz. He received the President’s Undergraduate Fellowship in 1977 for research correlating eye movement and brain function conducted at the Langley Porter Neuropsychiatric Institute in San Francisco.